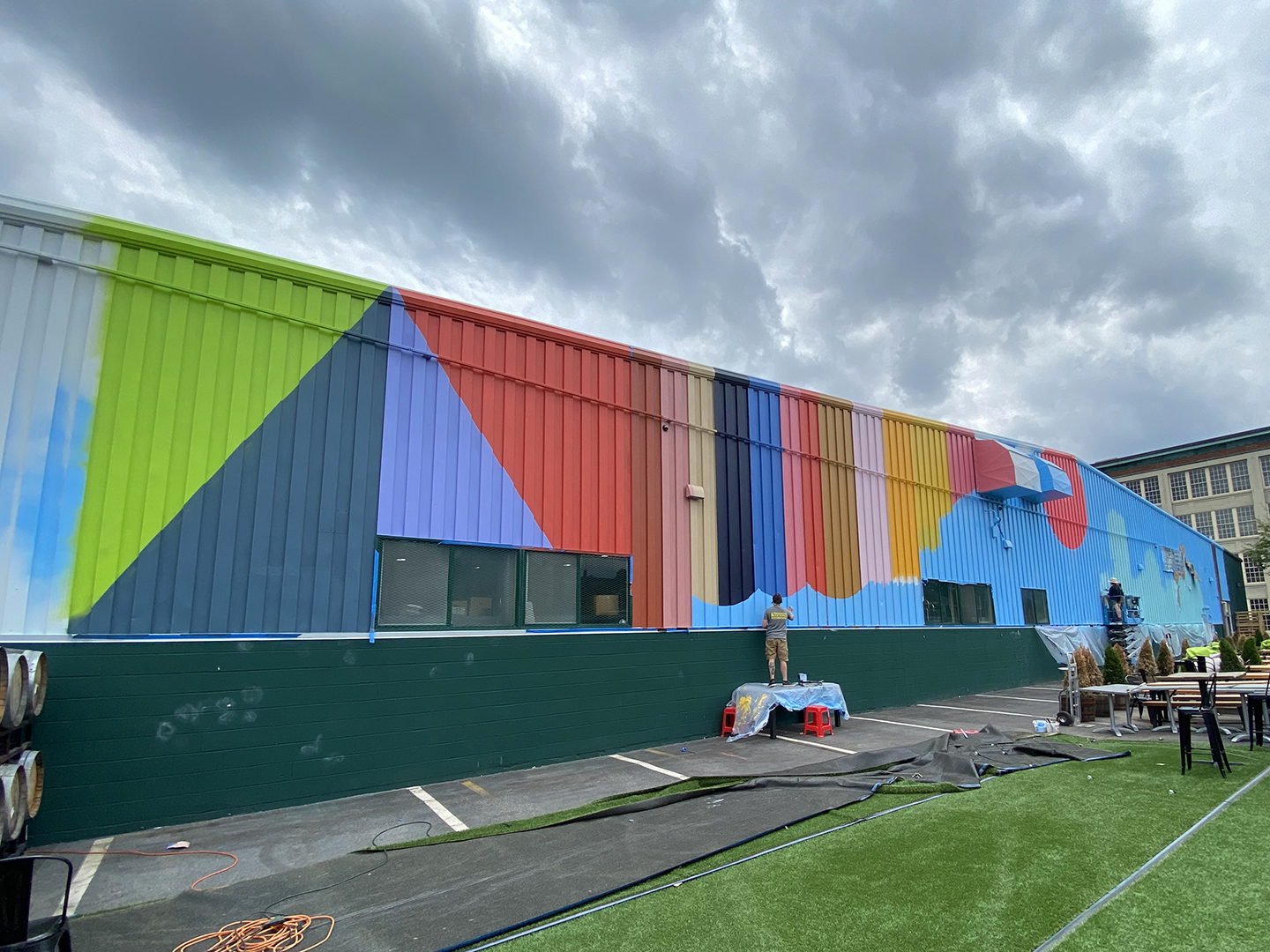 That’s the title artist Mia Cross picked to name the massive mural she’s painting on the side of our building. It also describes the piece itself.

“I sat down with my dad at our kitchen table up the street,” she explained. “We opened a Post Shift and had paper in front of us, and we scribbled down marks and gestures that we imagined our mouths would be feeling after our first sip of beer.”

Looking at the building from Grant Street (between Clinton and Clark streets) and following the mural from left to right, Cross explains that her mural tells the story of your taste buds and brain activity as you take your first sip of beer. Big splashes of color, organic shapes, and patterns flow to the right and give way to a gathering of people, meant to signify the sense of community that beer and our brewery brings to the neighborhood.

“I do a lot of figurative work, but I thought for this space it should be more colors and a linear style because it’s so large,” said Cross. Her canvas stretches over 300 feet, she’s used about 45 gallons of paint, and around 50 different colors.

“I was thinking on the idea for a while. Mostly what would be a striking composition, that even if you’re not at Jack’s and just driving by you could appreciate the colors,” said Cross. The challenge became how to create something eye-catching and colorful, but still relate it to the brewery. Then the idea to visually represent that feeling of “the first sip” came to life.

Painting something so massive has its pros and cons. Working through the third rainiest July on record, Cross says the weather was a challenge.

“Mother nature has been quite the dame on this,” she said. “There’s been either intense heat and humidity, or on and off rain.” Additionally, she’s been limited to only working the Mondays and Tuesdays that the Beer Hall and Garden are closed, although she’s come around to view the start-and-stop work flow as a positive. She’s hoping to have the mural completed by the end of the month.

“It’s sort of nice to take time off, reboot, and return to it without burning out. Things have gone well and it’s so great to see its progress. It’s so nice to drive by at the end of the day and see that we tackled another section, and to see it slowly come alive.”