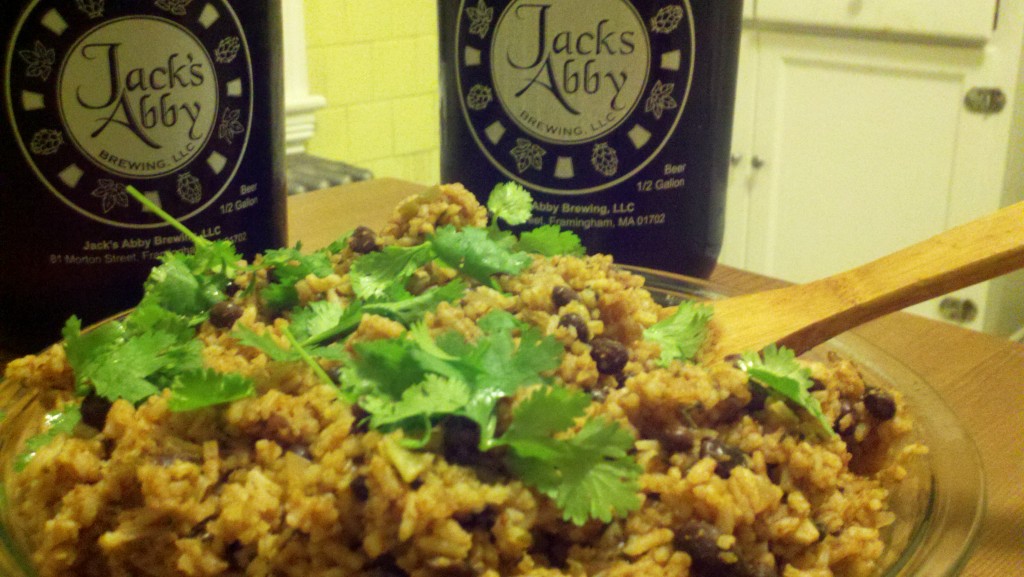 Smoke & Dagger Dirty Rice puts a Framingham twist on a traditional Cuban dish. Many recipes for dirty rice call for the onion, pepper, and cilantro to be puréed into sofrito, but I think just dicing them adds texture and gives the beer a little more room to have a flavor presence in the final dish.  It’s a simple recipe and, if you’re in a more carnivorous mood, a healthy dose of braised pork would be a natural addition. I paired it with a pint of Hoponius Union to balance the earthy flavor of the Smoke & Dagger, but I think it would also go great with a glass of Jabby Brau.  Enjoy, and stay tuned for Cooking with Jack’s Abby #2!

Salt and pepper to taste

1)    Before you begin, make sure your rice is done.  If you’re using the rice cooker, the best thing to do is leave it on ‘Keep Warm’ while doing the rest of the cooking.

2)    In a large pan, sauté the garlic in olive oil on high heat.  After about 20 seconds, turn the heat down to medium and add the onion/pepper/cilantro mix.  Stir slowly while adding the cumin, oregano, and a pinch of salt and pepper.

3)    After another minute, add the tomato sauce, beans, and finally the beer.  Stir continuously, but don’t forget to take a moment to enjoy the smell.

4)    After five minutes, add a healthy splash of apple cider vinegar.  Continue cooking for another minute.

5)    In a large separate mixing bowl, mix the contents from the pan with the white rice.  Stir until dirty.

6)    Let it sit for 5 minutes, then serve with a liberal garnish of cilantro.

Jimi Michiel lives in Framingham and is a member of the Jack’s Abby Dart Team.  He has previously written about classical and jazz music, but is excited at the opportunity to write about cooking with beer. He can be reached at jmichiel@msn.com

Guest Blog – Christine Suau, founder of Why Not Devin
October 20, 2020