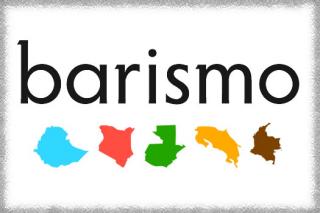 A few of us here at barismo fashion ourselves to be amateur craft beer geeks and spend our days off trying to discover exciting new beers. After drinking copious amounts of coffee during an average day here at the roastery, it is almost necessary to drink a few pints of some good, local beer to get back to normal. The beer scene in Massachusetts is burgeoning and we have been interested in finding a brewer to collaborate with to come up with some interesting coffee beers. Our green coffee buyer Silas and I took a trip out to Framingham to check out the Jack’s Abby brewery in the early fall and were blown away by the beers we sampled. We had no idea that lagers could be so complex and nuanced, and well, flavorful. Jack’s Abby quickly became our favorite local brewery and it has been great having more bars and restaurants around Cambridge adding some tasty lagers to their usual lineup.

It made a lot of sense to us to try developing a coffee lager, rather than a traditional coffee porter or stout. None of us have had a coffee beer in which we found the coffee actually well represented, previous to what Jack’s Abby has produced. In every other coffee beer I’ve tried, the purpose of adding the coffee is often a gimmicky way to market a beer that already has an inherent smoky, roasty flavor. Generally the coffee imparts very little to these already big, bold beers. To us, the flavor of roast is the least interesting aspect of coffee and for that reason we try to develop roast profiles that highlight the inherent flavor characteristics of the particular beans. Roasting a coffee darkly homogenizes flavors and muddles the varietal uniqueness that a particular coffee has to offer. We travel extensively in Central and South America to source some of the best coffee in the world directly from the farmers and producers. By roasting the coffee lightly, we are able to extenuate the delicate flavors of each coffee, rather than burying them under layer of roastiness.

The coffees that we have chosen to be brewed in the Jacks Abby beer have been very unconventional, as compared to what is often brewed with beer. The first coffee that I sent over was our Kenya Ruthangati. This coffee is extremely bright and sweet with a wonderful gr apefruit acidity. Kenya produces some of the most uniquely floral and aromatic coffee in the world. Brewed in the Smoke and Dagger, the Ruthangati brought an intense aroma that I’ve never encountered in a coffee beer before. The nose of the coffee Smoke and Dagger was wildly perfume-like and smelled of flower and tropical fruit. Much to my surprise, none of the acidity came through in the pint and it tasted more like melted coffee ice cream than beer. Unlike the overly intense coffee stouts I’ve tried in the past, I actually felt compelled to drink more than one of the coffee Smoke and Daggers.

We also sent over the Yellow Bourbon Microlot of El Bosque from Guatemala. This varietal offers extreme pear and tropical fruit sweetness, which shone through brilliantly in a batch of the Smoke and Dagger brewed with a very high dose of the Bosque. In the future, we’re looking forward to experimenting with differing methods of brewing or steeping the coffee in the beer. In particular, we’re excited to try doing a cold-brew coffee beer. Cold brew is a version of iced coffee made by steeping a high throw weight of coffee in cold water for eighteen to twenty four hours. The result is a thick, syrupy cold coffee that is about as smooth and clean as it gets. Adding cold brew to beer seems to be a given and we can’t wait to try what it tastes like in one of the delicious lagers coming out of Jack’s Abby.