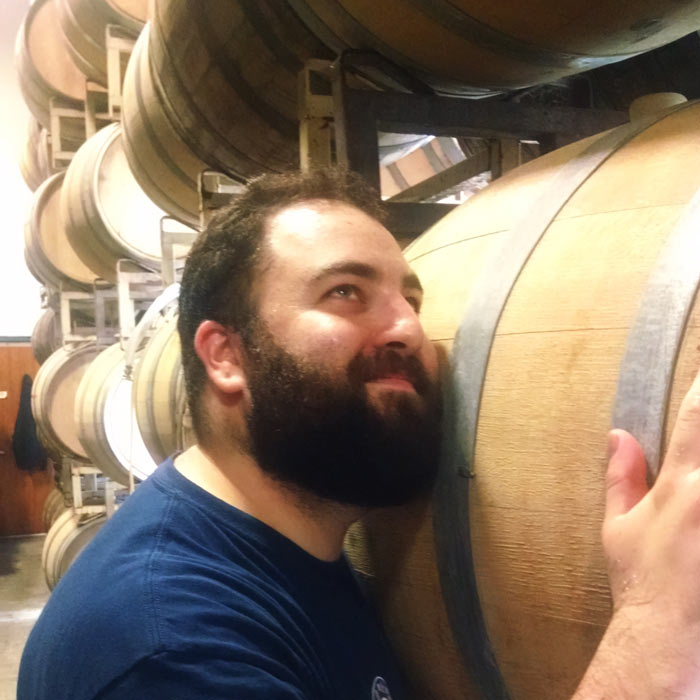 The Lager Diaries is a monthly series of interviews in which we celebrate the people behind the scenes who allow Jack’s Abby to be the best it can be. This month we hear from brewer Matt Cohen, the mastermind behind the brewery’s Sour Barrel Program. Below- Matt talks brew school, his favorite Sour Barrel beers, and the hazards of the barrel room.

We’ll start out with some basic questions, how long have you worked for Jack’s Abby?
MC: Let’s see I’ve been here for three-ish… I guess three years because my first week at work was the brewery’s first anniversary.

And had you been brewing before that? Did you go to school for brewing?
MC: I worked for both Opa Opa and Amherst Brewing Company and I had done some stuff at school. I took a zymurgy class, a biochemistry of brewing class, when I was at Hampshire College and I’m in brew school now with the American Brewers Guild. I got the Greg Noonan scholarship so I’ve been doing that since January.

Do you find it redundant, is it a lot of it stuff that you do every day anyway?
MC: No, because it’s the technical side of things. I have the practical side but this is the science of why you do what you’re doing- why you do certain things different ways.

So what’s your average day here like?
MC: I have two main things now- mostly I’m in the brewhouse. I tend to be the second shift brewer so I come in, take stock of what’s going on in the brew, finish the final two brews, and then take care of clean up and CIP.

And then what’s the other thing that you might be doing?
MC: The other thing is the sour barrels, I took that over in January. Back then I went through and installed what I call ‘ghetto sample ports’ but some people call them the ‘Vinnie nail’, Vinnie from Russian River, so I could sample all the barrels. Basically I have a special sized drill bit and I drilled into each barrel to sample it. Over two weeks I sampled every barrel we had in house, which was not as fun as it sounds. I took notes of all the barrels so now I have this big catalog of what we have and I work off that now.

How did that become a project that you took over? What drew you to sours?
MC: First of all- we had all these barrels, we had over a 100 barrels just sitting there ready to go, and some of them had been there for almost 2 years so I thought ‘something needs to happen with these.’ Secondly- it was always something I didn’t really understand. I understood brewing but sour beer was something I felt like I didn’t have a good grasp on and I wanted to learn for myself.

So what have you learned? What are some of the major differences between the souring process and the “normal” brewing process?
MC: It’s a much much slower process and the types of beers that are suited towards souring are kind of different. You want, really, almost a boring beer. You don’t want it to have a lot going on, you want less than 10 IBUs, you don’t want too much other stuff happening because it will take longer for the sour characteristics to come through. If you start with a hoppy beer, all the souring microorganisms will eat up the residual sugars so you end up with a super bitter hoppy mess with no sweetness to back it up.

Besides having the right beer to start with, what are some of the concerns involved or some of the challenges you’ve run into with the program?
MC: There are a couple different things. First of all, these are really slow working microorganisms. Generally it takes about three months before you really start to see anything. It’s just a time thing… It’s gonna go how fast it goes, you can’t do anything to make it faster. So there’s that. The other thing, and I think this is really the biggest thing for us, is there’s a potential for the souring microorganisms to get into your ‘clean’ beer. The brett for example, that could get into your regular beers and make everything sour and it could be really hard to source where that’s coming from. At this point basically everything is separate- we have separate gaskets, separate stainless, separate tanks we deal with so we’re doing our best to make sure these two things are never coming in contact with each other. If there’s ever a question about contamination I lean towards just throwing the gasket or whatever away. Also- you get bungs popping out of the barrels every once in a while because a little pressure can build up inside. So I’ll come in and find a bung on the floor and you don’t know if that barrel is going to be good anymore, especially if you don’t know how long it’s been out. When I was tasting them all in January, I had drilled into a barrel and it hadn’t had its bung in for who knows how long and it had completely turned to vinegar and was full of flies. It was disgusting, it was really traumatic to taste. I took it over to [another brewer] John and I assumed he’d, like, smell it first but he didn’t- he just took a big sip. I still feel pretty bad about that.

What do you consider some of your victories so far? What are your favorite beers you’ve put out?
MC: I think my favorite so far was #3, because that was my first successful blend. Before that I just tried to do one particular kind of beer in a few barrels but this was multiple kinds of beer blended together. It ended up being really what blending was all about- the end result was better than either of the first two. Everyone seemed to really like that one, too, I feel like since that beer people have been liking the sours more and more anyways so maybe that one was the one that kind of got us over the hump. I also thought the raspberry one came out awesome- it went too quick, I didn’t even get to drink very much of it. That one was exactly what I wanted it to be, it had a beautiful color.

How would you like to see the program grow, what sort of things would you like to see happen in the future?
MC: I have all sorts of little experiments that I have going on. I’ve been playing around with all sorts of different fruits- trying to find out what the right dosage is and how they work with our beers. Herb built a little souring bottling line so hopefully we can do some more bottles and get the beer into more people’s hands. That will be good for people who maybe can’t make it out to the brewery or who don’t want to drink a 64oz growler of sour beer. We just have so many good barrels and the way the room is right now I can’t even get to half of them because I have to take the whole room apart. So when we move to the new space I’ll have easy access to everything and I’m excited for that. Stacking barrels is literally taking years off my life. This winter I was stacking barrels and, you know we stack them five high, so I was carefully stacking the fifth one on and I heard this really loud bang and it scared the crap out of me. A giant icicle had fallen off the roof and landed right next to me outside.

Could’ve been a lot worse…
MC: I just about had a heart attack.

Is that what you’re most excited about with the move, more space?
MC: More space and also we’ll have more draft lines so hopefully we’ll get to have these beers more regularly available.

What are two beers we can find in your fridge right now?
MC: I have a Cascade Figaro that [my wife] Becca bought me that I’m pretty excited about. I’ve been waiting for a special time to drink that one. I tend to just go for hoppy beers so I usually just grab a six pack of an IPA or something like that.

That’s what Lashes said at first but then he changed it to OJ.
MC: Well in that case I’ll say pineapple juice.

What’s your favorite thing that you get to do at work?
MC: I enjoy brewing and I get to listen to music all day. I listen to a lot of good music around here.