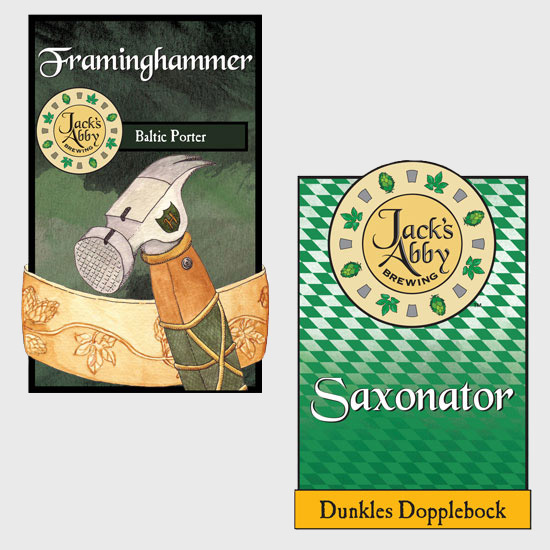 Late winter is an exciting time for us here at Jack’s Abby, because it’s when we release two of our full bodied winter seasonals, which both medaled last year at the World Beer Cup! Competing against breweries from all over the world, Framinghammer, our Baltic Porter, took home a WBC Gold while Saxonator Dunkles Dopplebock landed the Bronze. Framinghammer is now available in all of our markets in new four packs, while Saxonator remains in our classic half liter bottles.

Framinghammer is a classic example of a the Baltic Porter, a strong dark lager influenced by both the Baltic and British brewing traditions. We brew Framinghammer with dark German malts, oats and additions of Turbinado brown sugar. After fermentation, the beer lagers for two months, a much longer term than most of our other offerings. Framinghammer is bold and rich, with big malty sweetness tempered by just a hint of roasty bitterness and a clean finish that hides the heft of this beer, which is considerable at 10%! The bouquet is densely packed with chocolate and coffee notes, and as a result Framinghammer is a great partner for roasted meat, assertive chocolate flavors like those in truffles or lava cake, or with a fruited creamy cheese like Brie or Stilton.

Saxonator is a strong German lager descended from beers monks in Munich and the area around it brewed for sustenance during times of fasting. Like Framinghammer, Saxonator lagers for two months and uses distinctive German malt. The sumptuous dark fruit and chestnut notes in this beer’s bouquet pair well with a very wide spectrum of food: gamey meats like venison or duck are fantastic with Saxonator, and you’ll be hard pressed to find a better partner for pork, whether it’s a roasted shoulder or a thin pane of dry aged Parma proscuitto.