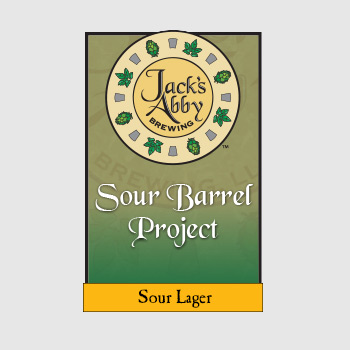 We recently released the first Sour Barrel Project beer in our taproom for growler fills and draft pours. Our Sour Barrel Project series will be comprised of special barrel aged beers we have soured with the aid of wild yeast and specially cultivated bacterial strains. Brewer Matt Cohen is heading up the sour barrel project and hopes to release roughly one beer per month. We hope to release bottles of sours eventually, and Matt also wants to infuse fruit into some of the beers as we have done with our Berliner Braun and Berliner Lager in the past.

Sour Barrel Project #1 is a golden sour lager that we aged in red wine barrels for more than a year with brettanomyces, lactobacillus and pediococcus. If you’re not familiar with those names they sound frightening and unlike something that should be in your beer, but brettanomyces is wild yeast that lives on the skin of fruit, and lactobacillus and pediococcus are bacteria used to manufacture cheese, yogurt, sour cream and other tasty treats. We inoculated the barrels containing Sour Barrel Project #1 with these microbes and left them to swim around and eat up residual sugars and the oxygen that gradually seeps in through the oak staves of the barrel to create fruity, sour flavors in the beer. Because the progress of the souring microbes, particularly brettanomyces, are difficult to predict, a beer may take several months or even years of aging in the barrel before a desirable bouquet is produced. The result is some very distinctive and complex beer that we hope you’ll all enjoy!

The beer pours slightly hazy and golden with light carbonation. Aromas of apple and citrus overlie fresh bread and a slight farmhouse funk. This beer is packed with fruity notes! The clean, tart citrus and rounded apple sweetness present in the nose explode in the bouquet, with a slightly dry finish and light funk. Sour Barrel Project #1 would be a good pairing with a fish or poultry dish, creamy cheeses, or a fruit plate. Proust!