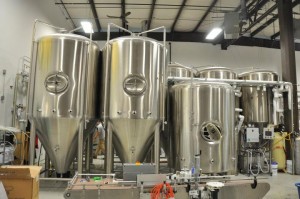 June 11, 2012 – Framingham, MA – Jack’s Abby Brewing, an American craft brewer specializing in lagers, today announced the purchase of additional tanks that will allow for increased production to meet the growing demand for its lagers.

“In our first year of production we’ve seen an unexpectedly high level of demand for our lagers as well as our seasonal beers,” said Jack Hendler, brewmaster at Jack’s Abby. “These tanks will allow us to expand bottling and grow our line-up of seasonals and specialty beers”

The new tanks include one 40 brite beer tank and two 40 barrel fermenters. This will allow Jack’s Abby to introduce new lagers and increase production.

According to Hendler, the first beer out of the new brite beer tank will be Red Tape Lager to be released one year from the original brew date.

“With the new tanks, we’ll be bottling our barrel aged Biere de Garde Rye Lager aged with brettanomyces, a Summer IPL with ginger, grapefruit peel and buckwheat, Octoberfest, Wet Hop Lager, Kiwi Rising DIPL, and Saxonator through the end of the year,” said Hendler. “We’ll also have various barrel-aged offerings including a sour version of our Leisure Time Lager.”

More photos of the new tank can be viewed in this album on facebook.

The name, Jack’s Abby Brewing, pays homage to co-founder Jack Hendler’s wife, Abby, while evoking the tradition of monastic groups in Europe who create handcrafted beers in their abbeys. The brothers are inspired by the tradition of craft brewing using quality local ingredients, mindful labor and great recipes to create delicious, authentic beer.