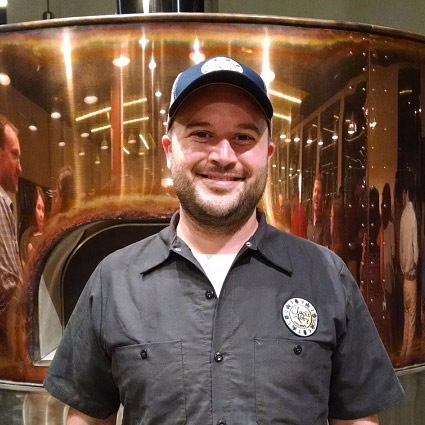 This month on The Lager Diaries, we profile one of our newest additions to the Jack’s Abby team- Chef and Restaurant General Manager, Gregg Bergeron. A Massachusetts native and self-taught chef of 15 years, Gregg is no stranger to MetroWest- he is known as the recent longstanding chef at the popular Stone’s Public House in Ashland. Read on as Gregg talks about his love of cooking, his history with Jack’s Abby, and his plans for the Beer Hall menu.

Can you give us a little background on how you got involved in the food industry?

GB: I started at the very bottom. Shortly out of high school I was cooking about one day a week, just to do it, and it’s something that really grew on me. I was pretty bad right out of the gates but enjoyed the work so, little by little, I’ve taught myself more and more. I was working at the Avery Dennison warehouse in Holliston, driving a forklift second shift, and it was down the street from the place that would become Stone’s Public House. Over time I became friends with someone who worked there and picked up a Sunday night shift as a way to make some extra income… it kind of took over from there.

What about cooking, or about the work, really drew you in?

GB: Back then it was really about the structure and the set up and the over-all process. A lot of people, when they see a plate, don’t necessarily realize the number of hours that went into it. So that whole set up- thinking about the order of things, thinking ‘how do we put this out.’ It’s about the preparation. Even though you’re able to produce something quickly in the moment- hours have led up to that. All the time involved.

Did you ever envision yourself being someone who was running a restaurant?

GB: Maybe not at the beginning- but, yeah, within a short time. When we opened Stone’s in 2003 I worked with Matt Murphy who was the original chef. I think working with him for those first 3-4 years is what really made me realize I wanted to run my own kitchen. He inspired me- watching him start from scratch, seeing how he was with food, and all he taught me… it made me really imagine myself in that position. It took a while to get there, though.

How did you first come to interact with Jack’s Abby?

GB: Back in 2011 when Jack’s first opened, I was in charge of purchasing the wine list at Stone’s and that was my primary focus. Sam came in with a couple growlers of Red Tape and sat at the bar and we started talking and I honestly didn’t think a whole lot of it- it was just a tasting and I had no clue really what Jack’s Abby was at that point. But he invited me to come down and check out the brewery and I came down on a Saturday and took a brief tour, back when there were only a few things out back and the taproom was set up completely different. I think being able to taste the full line up- which at the time was probably 4 beers- was really eye opening. Being able to see the process, even though it was a lot smaller, seeing how organized it was… that it was bigger than just some guy homebrewing…

You’re a real process and organization kind of guy.

GB: I try to be! I think the thing that really sold me that day was, they’d only been open for maybe a few months at that time, I couldn’t believe how many people were there on a Saturday at 3:30 in the afternoon. The amount of traffic that was coming through here and buying growlers, it made me think, ‘wow I should really get on board with this because I think something really cool is happening.’ Tasting the beers, seeing the immediate interest from the community, I was blown away.

What really appealed to you about what they’re doing, what really stood out?

GB: Well the fact that it was local, that they’re brewing only lagers- which was such a foreign concept to me, I didn’t really understand at first. It had to do with the flavors and the process and, at the time, I didn’t understand why I enjoyed the beer as much as I did, but the fact that it was a lager was why I was enjoying it. My mindset of what a lager is was definitely more in line with macro brewing- I always enjoyed a Red Stripe in the summer but that was probably as ambitious of a lager as I’d had. So seeing what was capable- drinking Smoke & Dagger and drinking Hoponius Union was pretty eye opening to me. It was like, ‘wow there’s a lot you can do with this and nobody is doing it.’

There was one other time… early on when Jack’s Abby was self-distributing. I had a shift in other deliveries that caused 3 spots on our draft lineup open at once with nothing to put on. So I called Sam saying, “can you help me out?” He showed up within the hour with 5 kegs in the back of his car and hooked us up for the weekend. He really took care of us and right then and there that told me something about who they were. With the first taproom expansion we’d talked about possibly catering so we’d talked about food and beer a bit but it never manifested into anything. A while later Jack’s did an episode of Beer Geeks TV and Sam called me up and offered to film me cooking with Jack’s Abby beer so it’s all come from there I guess. Since the beginning I’ve had all these interactions that have made me care about what was going on here.

I had no idea the Gregg/Jack’s Abby connection was so longstanding! So looking forward to the new Beer Hall, what excites you the most about the whole project?

GB: Just the change in my routine- it felt necessary, especially for creative reasons. As much as I love Stone’s and I am really proud of the brand that we built there- and I still am a customer there, and my wife still works there, and I live down the street from there- but you reach certain points where you feel like you might want to switch it up creatively a bit. So when I read in the paper that the brewery expansion was happening, I immediately inquired. I just figured I’d have a conversation with Sam like, “congratulations! You said restaurant- what’s up? What are you thinking of doing?” What really excites me is working with pizza and dough. It’s always been something I’ve been passionate about, but always something that I’ve had to do more on the side. We did a lot of fries and potatoes and more Irish fare at Stone’s so baking and fermentation skills have always been something that I’ve wanted to work on.

Are you now drawing on all your experimentation, where do you start when it comes to menu creation? What’s inspiring you?

GB: Let’s see…where do you start? You start with what’s available, seasonally. I try to draw in as much influence from Jack, Sam, Eric, everyone around me. Ask as many questions as I can about what type of food they envision in their place. From there it’s just thinking and reading and taking standards and trying to put a spin on them so they become our own and fit within a theme- and I’m not 100% sure what that’s going to be at this point but in the next few weeks it will become clearer. Right now it’s a lot of loose pie-in-the-sky ideas that we’ve going to fine tune and develop and get feedback on… and it will keep evolving of course.

Jack’s Abby has a real German angle to it, but most people don’t think German and jump to pizza.

GB: No, no they don’t. I’m not sure that I’ve gotten fully into what the German fusion element will be on the pizza per se. When I think about small plate offerings and black board specials, I think that’s where we get more into German faire. Look for some spätzel and sausages. I think the real theme of the menu, the real primary focus, is food that goes really well with beer- comfort food especially. So when we think about that, any time we can add a little German flare to something I think we’ll put that out there. I’m really looking forward to cooking with the beer in addition to just cooking food that will pair well with beer. That’s another thing that’s new to me as we’re going to be beer only and I’m used to cooking with wine or liqueurs. It’s going to be a change, cooking with beer as a focal ingredient. I’m looking forward to it- it’s going to be fun.

What are things you’ve been learning from the beer world?

GB: I’m probably out on the far edge and slowly working my way into the beer world at this point. It’s something that I have a healthy respect for and I hope to learn and meet as many people as I can. It’s going to be different customer base for me-it’s an adventurous palate that you guys have tuned your offerings to so it’s important for me to get a little more adventurous with the food to compliment that.

Lastly, I’ve got our rapid fire questions that we ask everyone. What are two beers we can find in your fridge right now?

GB: They’d probably both be from Jack’s Abby. I’ve got more wine in my cellar than beer in my fridge at the moment- Spanish wine, 9 times out of 10.

Best music to bump at work?

GB:That’s hard- it’s got to be multi-genre, very eclectic.

Favorite part of your day?

GB: Probably having a beer with the guys at the end of a shift.