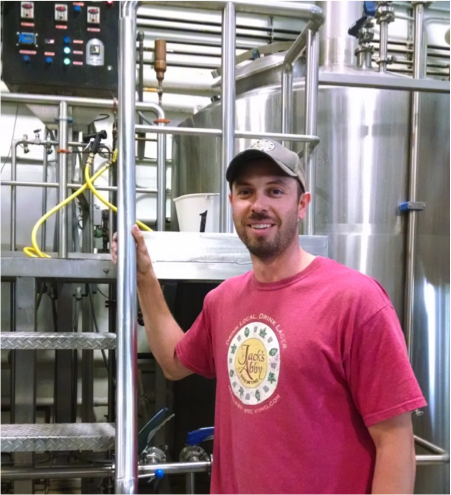 With a lot of big changes on the horizon, the hard-working people behind Jack’s Abby become more and more important. In honor of our awesome team, we’re kicking off a new blog series featuring monthly interviews with employees. Mike Gleason, aka Lashes, is a head brewer here at Jack’s Abby. Having worked here for over three years, since September 2011 to be precise, he’s seen it all. Read on to learn about his nickname, his namesake beer, and what he’s excited to be doing in the new space.

So your name is Mike, but everyone here calls you Lashes-
MG: Yes.

Why is that?
MG: Well it’s a bit of a story but my wife once told Sam that she thinks I have nice, long, lovely eyelashes and the next day he came in and that’s been my nickname ever since.

What does your average day look like, when do you come in, what sort of things are you doing?
MG: If you’re brewing, it’s broken into two shifts- an A.M. and a P.M. The A.M. will come in around 4:30 and switch around 1:30. The P.M. will go from 1:30 until whenever things are done, usually around 9 or 10. If you’re doing a rack [transferring wort or beer from one tank to another] you can be here anytime between like 8 and whenever you need to get it done so it’s usually like 8-10 hour days.

What are you doing if you’re not brewing?
MG: Racking or I’m in charge of inventory. So I’ll take stock of what’s going on, what we need to order, and move things around from our off-site storage location to here.

How did you get into brewing, did you study?
MG: I didn’t study. I used to live in Colorado and I really fell in love with the craft beer out there and in 2007 I started home-brewing. When I moved out here I really wanted to get into the beer industry and Jack is the only one who gave me the opportunity.

You’ve had a hand in some recipe creation- “Lashes,” our winter seasonal, is entirely your brain child. How do you go about coming up with a new beer? Where do you start when it comes to recipe creation?
MG: For Lashes I went off of what I liked in the past. I really liked Red Tape, that’s what made me fall in love with Jack’s Abby, so I knew wanted that color. Then I really wanted a balanced hoppiness. We tend to really highlight our hops here with light malts and a lot of hops so I wanted to do something more balanced. I also wanted to try different hops, going for an earthy spicy flavor instead of citrusy. I kind of took old recipes and tweaked what I wanted.

How does a beer go from being something brand new to being a seasonally produced beer?
MG: It was all luck. It didn’t turn out too bad, people seemed to like it, so it started as a specialty release and turned into a seasonal the next year. I was pretty happy with that.

What other beers have you had a hand in?
MG: Besides Lashes, it’s been mostly barrel-aged beers or beers that were one-offs and haven’t come back. I made Almond Joy in the very first Battle of the Barrels- that was Smoke and Dagger aged with almonds and coconut. I also did Boston Steam Pie- a warm fermented beer that used vanilla, cocoa, and lactose.

What are you most excited about with this upcoming move?
MG: The ability to produce more, maybe do a lot more German-style beers.

Are German styles your favorite?
MG: They’re starting to be. Working here I learned to appreciate hoppy beers and what hops do from a brewing perspective but I love malty German beers. I love dunkles- maybe we’ll get to do a couple of those in the new place. I’m really excited about the new equipment- it’s fun to learn new things especially when you do something over and over every day. This will be like starting fresh.

What are two beers we can find in your fridge right now: Hoponius Union and Framingham Lager

Favorite thing you get to do at work: Hiding from Jack among the tanks