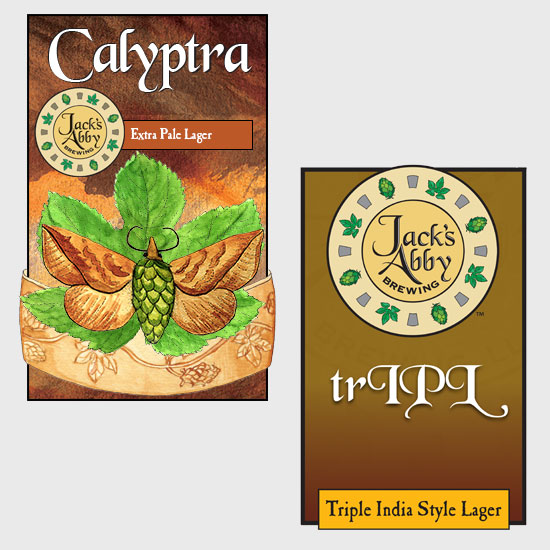 Attention hop fanatics! We are re-releasing three of our most acclaimed hoppy lagers this month for your enjoyment!

Calyptra was formerly part of the Hopstitution series, but it was so popular we made it a distinct beer. Calyptra is a sessionable Extra Pale Lager (or XPL) named for the two aroma hops we used- Citra and Calypso. Calyptra’s bouquet is exceptionally rounded, with passionfruit and melon notes a backbone of slight lime rind bitterness. At 5.5% ABV, Calyptra is intended to be a sessionable beer, and the clean finish won’t unduly fatigue your palate after more than one. Calyptra bottles are available exclusively in our new Variety 12 Packs which will be available in all five of our markets, with 64oz growlers and pint pours in our Tasting Room. Calypta would be excellent in a pairing with moderately spiced foods like Indian curry or Lemon Pepper Chicken.

TrIPL was one of our most popular beers of 2014 (we sold out of our initial 40 bbl batch in a matter of weeks), so we brought it back! TrIPL is our biggest hop forward beer to date, clocking in at a hefty 10% ABV, and all of that malt just barely balances out the massive additions of Citra, Columbus and Chinook we loaded this beer up. The nose is massive and resinous, and the bouquet is intensely bitter (well over 100 IBU) with deep pine and citrus rind astringency dominating the first taste with a rush of sweeter citrus flesh and caramel malt following on the finish. TrIPL is available in individual half liter bottles or 64 oz growlers for takeaway sale at the tasting room and either 4oz or 10oz pours. A beer this big can cut right through intensely spiced food like Sichuan style Chinese, or a black and bleu seasoned burger.

Our first batch of Triple Dry Hopped Hoponius Union was sold exclusively in the taproom, where we sold through our 9 kegs in three days! We are making a second batch for both our table at the Extreme Beer Fest in Boston and for pints and growlers in the tasting room. Unlike our first batch, which utilized the same aroma hops we normally use in Hoponius Union (Citra, Centennial and Calypso), the upcoming batch will be hopped with a whopping 11.2 pounds of Mosaic and 3.5 pounds of Simcoe. This much Mosaic should yield an aggressively fruit forward hop profile.